Without bells and mistletoe or the tinsel’s silver glow

On the fifth day of Christmas, we will travel to a refugee camp in Germany in 1944, with young Silvija and her family.  This story is from Silvija Grigulis Jones’ memoir:  What Next? (available here)

By December 1944 we had made our way as refugees from Riga to nearly as far as Berlin before we heard the dreaded noise of the Eastern Front advancing again. There, our family was able to stay for several months in a small village called Tiefensee. Our accommodation was a small hut near the railway station.

I was 9 then; I attended the local village school, one large classroom for children of all ages, taught by an elderly man with a wooden leg. To help me with the German language, he used a German/Latvian dictionary, calling out to me: “Sylvia, gib mir deine ‘Várdníca,” and he would point out the words for me in Latvian, so that I could understand what he wanted me to do for homework. One time, frustrated by some of the older boys at the back of the class, he threw his walking stick across our heads, but the guilty ones ducked, and someone else caught the punishment.

For a little while, before Christmas, life seemed almost normal. The eastbound trains sometimes stopped at the tiny station. We noticed that the passengers were mostly young boys and old men in uniforms. The air raids continued, day and night, but the bombs fell mostly on Berlin.

Once, during a daytime raid, Dad saw a bomber falling out of the sky. He and I went into the forest to see if we could help any survivors. All we found were large pieces of wreckage scattered among the trees.

The air raid shelter was a narrow, deep trench with sloping entrances and exits at either end; it only had standing room for ten people, so we did not bother going in any more. On cold winter’s nights, my mother did not consider it a good place for us to be, so we stayed in our two bunk beds, pushed together so that three people could sleep side by side on the top and three on the bottom bunks. There was only one room and a small kitchen in our hut, leaving no room for more beds.

Our grandmother insisted on waking us up when she heard the sirens, so that we could pray and say our act of contrition to be in a state of Grace before we all died in our beds. My mother didn’t agree; she was sure that the children at least would qualify for heaven, whether they were asleep or awake. I was not worried, because I liked to sleep, and as a nine-year old, I knew that heaven would be a happy place to wake up in.

On sunny days I was sent up to the village for some bread buns, called ‘Ründstuck.’ Hot from the bakery, they were a delight to bite into, but they were rationed. I had eaten mine by the time I got home. The milk was measured in a tin can, with a swinging handle and a lid. On my way home I would stop and pour the top of the milk into the snow, and scooping it up with my mitten, I would enjoy the best self-made ice-cream in the world.

The Christmas tree came from the forest, which was all around us. There were no buildings on the far side of the railway line, and the only buildings on our side were the station, the station master’s house and our hut. The village itself was some distance away, uphill, along the road parallel to the railway going eastwards.

One day, everyone was out. Sneaking into the kitchen, I prepared a Christmas surprise for my family. All I could find in the empty cupboards was some sugar and a few carrots. Perhaps my mother had gone shopping with the boys. There was not much one could buy – most things were rationed. For the time being, I had to make do with the carrots. As best I could, I cut them into halves lengthwise and arranged them on a plate like spokes of a wheel, sprinkling the sugar on top. In the centre, I put some green pieces from our Christmas tree. The green, white and orange colours looked lovely on the plate in the middle of the table.

When the rest of them came home, my mother did mention that the carrots were meant for the main meal, but eventually my creation was left as a decoration. I don’t remember what our Christmas dinner consisted of, but I was very proud of my contribution to it.

We also made some surprise parcels in the shape of Christmas crackers, filling them with surprises, including a few sweets and pieces of cake. They were used to decorate the tree. Then, there were a few real candles, which are a must on any Christmas tree. These were lit on Christmas Eve, when we gathered around the tree to sing Christmas carols and do our party pieces. We were also allowed to help ourselves to the goodies hanging from the tree. Needless to say, most of the decorations did not last long, except for the paper angels and the tinsel, which we had found outside, littering the ground. These were chunks of thin silver metal strips which fell from the sky during air raids, and looked very much like the silver tinsel today. I was told that the falling tinsel somehow confused the big guns.

That same Christmas Eve, there was a knock on our door and outside stood some of the children from my school and their parents, bearing gifts for us. I received a soft, handmade teddy bear, whom I sat beside my doll Baiba under the tree. Although I didn’t play with dolls very much, I had managed to bring Baiba all the way from Latvia, and I made sure that she stayed with me wherever we went. Now she had a friend. 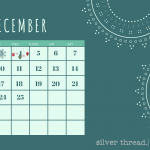 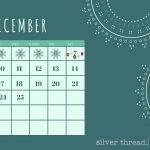 Please have snow and mistletoe And presents on the treeChristmas stories, Memoir