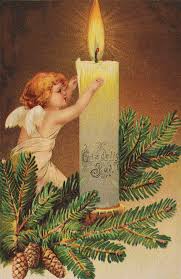 I remember when my Dad would bring me with him to get our Christmas tree. It had to be a very special tree as our house was very small and the Christmas tree corner was very small indeed. It was between the front window and the cross door in the kitchen. The corner was just big enough to hold a card table with a green baize cover. A layer of Christmas wrapping paper was put over the baize for protection.  Dad and I would trudge up to the wood and examine all the baby trees. Dad was an expert on picking out the best-shaped one. It had to be exactly triangular with a single spike on top for the star.  When he was satisfied, he sawed it off at ground level and we headed home – Christmas was officially beginning.

I remember when we brought the little tree into the kitchen, Mam would examine it even more critically than Dad – there was bound to be something not quite right but “it’ll do, I suppose” was her usual comment. The occupants of this corner, the pope on Mam and Dad’s papal blessing and the Sacred Heart from his picture, looked down too but they always seemed to approve and give their blessing. Then the small candle-holders, shaped like oyster shells were produced from their hiding place, tissue-wrapped since last year. Little candles, no bigger than birthday cake candles, were put into their holders in the centres of the shells, and then clipped to the branches. Little strings of curly, silver tinsel were carefully draped over the branches, away from the candles and our tree was ready and looking beautiful. No health and safety worries back then.

I remember when Rural Electricity came to Monard, Mam bought a little bracket, which Tom Ingle wired in for her, for under the Sacred Heart picture. A red bulb with a cross-shaped filament was plugged in with due ceremony.  Unceremoniously, this was plugged out for the duration of Christmas, as our string of coloured bulbs replaced the poor Sacred Heart’s light for the festive season. We had joined the ranks of the sophisticated – we had electric coloured lights on our Christmas Tree.

I remember Christmas Eve as being every bit as important as Christmas Day. It was, and still is, my birthday.  Despite all the work Mam had to do every year, I always had separate presents for my birthday and Christmas and I always had a birthday cake. This was so important as a big slice had to be cut and put on one of the good plates for Santa. Dad said Santa always enjoyed the cake with his bottle of stout after he came down the chimney. There were two carrots left out for Rudolph too.  I was always thrilled to see the crumbs on one plate and the tops of the carrots on the other on Christmas morning.  In my stocking every year were shiny brass pennies – the old ones with 1 pingin written on them and a lovely, feathery hen and chicks – I got one penny for each year of my age. Much later, Mam told me the secret of the bright, brassy pennies – she put each one into a potato which removed the discolouration and made them look newly-minted.

I remember when Mam began buying the ingredients for her cakes and puddings as soon as the shops began to advertise them in September. She was sure the prices went up the closer you got to Christmas. She bought the bags of currants, sultanas, raisins, the candied peel and cherries by degrees over a period of weeks and, so by the middle of October, she was organised and the baking would begin. The cakes and puddings always needed at least two months to ‘mature’ properly. As Christmas week approached, the cakes were removed from their wrappings and the final preparations began.  Mam covered the top and sides of the cakes with warm, sieved marmalade.  She then made the almond paste, watched greedily by my brother and me. Almond paste has always been my favourite taste of Christmas and we got the trimmings after she had rolled it out and cut it to fit the cakes. After it had been placed carefully on the cake, it had to be left to dry thoroughly so the oil from the almonds wouldn’t spoil the pristine whiteness of the icing which was put on afterwards. After a day or two, the cakes were moved to the silver coloured cake boards ready to be iced. The royal icing was made and spread roughly at first and then smoothed with our pancake knife with the green handle, dipped frequently in boiling water.

Next day, more icing was made and the old tin icing set appeared, with the different shaped nozzles. I still have this icing set, very battered but still usable. Blobs were placed as artistically as Mam could manage around the top of the cake and around the base. Then the little jar of silver balls appeared and one was put on top of each blob. A frill with Christmas scenes went around the outside of the cake, fastened with another blob of icing. A santa and a few holly leaves on the top and the cakes were finished. Mam picked out the best-looking one and she and cake travelled by bicycle first, then by bus into the Bus Office where it was handed over the counter to be sent on next day’s bus to Ballinhassig. My Dad had cousins who lived there, not far from where Cork Airport is now. Next day, Johnny and Cissie drove in their pony and trap to the main road. There they waited until bus arrived from Cork and collected their Christmas cake from the conductor.

I remember our Christmas turkey always arrived by bus.  It didn’t occupy a seat but lay in a large brown paper parcel on the luggage rack. Each year, Johnny and Cissie picked out a turkey on their farm, killed and plucked it for us. They made the journey again to the main road and they handed over their parcel to the conductor. The turkey travelled to the Bus Office in Cork where Mam waited patiently. She collected the parcel, caught the Blarney bus and, at Killeens, she transferred the turkey to the carrier of her bicycle and cycled home. Our dinner had arrived and the Give and Take of Christmas had been accomplished.