Gretta Gray in The Herald 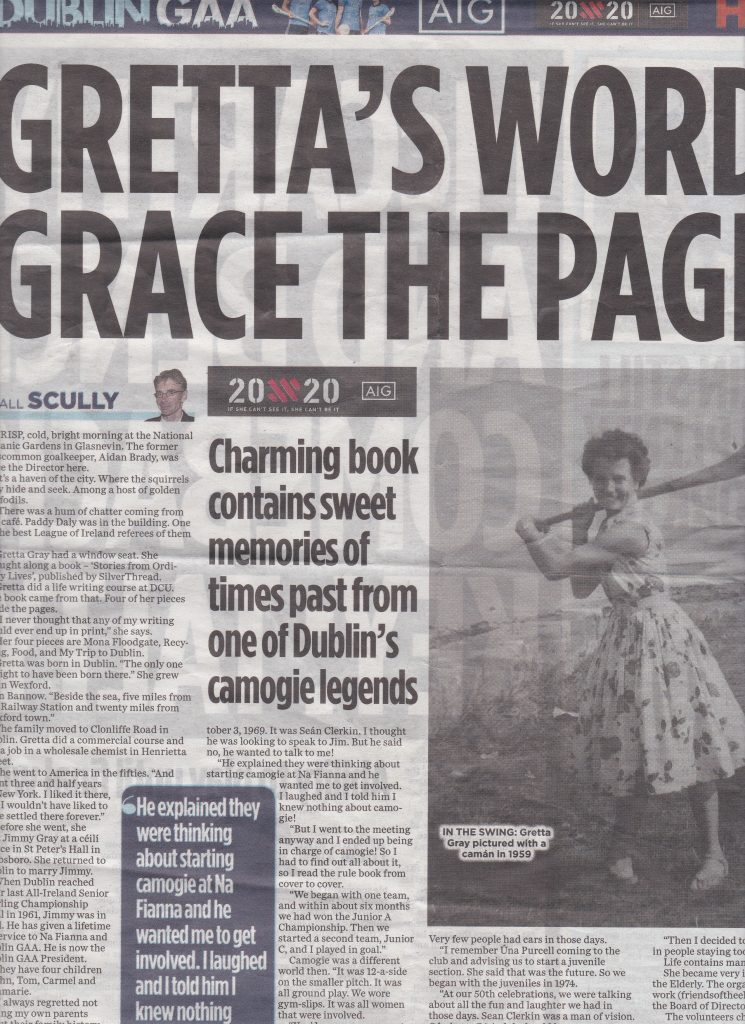 We were delighted last week to read a full page in The Herald about our Silver Thread writer Gretta Gray, whose stories feature in Stories from Ordinary Lives. She is also featured in our Authors page.

Here is a short excerpt of Niall Scully’s article:

Gretta Gray had a window seat.  She brought along a book – ‘Stories from Ordinary Lives’ published by Silver Thread.

Gretta did a life writing course at DCU.  The book came from that.  Four of her pieces made the pages.

“I never thought that any of my writing would ever end up in print,” she says.

Her four prices are Mona Floodgate, Recycling, Food, and My trip to Dublin.

Gretta was born in Dublin, “The only one of eight to have been born there.”  She grew up in Wexford.

In Bannow. “Beside the sea, five miles from the Railway Station and twenty miles from Wexford town.”

The family moved to Clonliffe Road in Dublin.  Gretta did a commercial course and got a job in a wholesale chemist in Henrietta Street.

She went to America in the fifties. “And spent three and a half years in New York.  I liked it there, but I wouldn’t have liked to have settled there forever.”

Before she went, she met Jimmy Gray at a céili dance in St Peter’s Hall in Phibsboro. She returned to Dublin to marry Jimmy.

When Dublin reached their last All-Ireland Senior Hurling Championship final in 1961, Jimmy was in goal.  He has given a lifetime of service to Na Fianna and Dublin GAA.  He is now the Dublin GAA President.

They have four children – John, Tom, Carmel and Annmarie.

“I always regretted not asking my own parents about their family history and their time growing up, so I wanted to leave a record for my children,” explains Gretta.  “And that’s what the book is all about.  People’s memories.  Memories of their lives.  Sharing their stories.”

The article goes on to relate Gretta’s involvement in Camogie, which has played a big part in her life.  Gretta is still very much a part of Silver Thread workshops, she is working towards a memoir to pass on to the next generations.